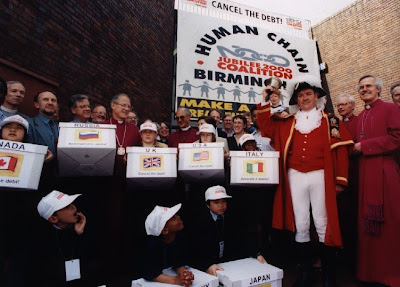 It's with a good deal of sadness that my first blog entry for 2010 is in recognition of the death of my good friend, London's Town Crier of more than 30 years, Peter Moore.
Peter was due to be presented with a lifetime achievement award at the London New Year's Day Parade but died in his sleep at home in Wandsworth on 20 December. He was 70.
The full story can be read here.
I had the privilege to know Peter as both friend and work colleague for some 20 years.
As well as representing the City and various London Boroughs, during the time I knew him best Peter worked for the Tower of London and London Aquarium, as well as fulfilling many charitable and corporate events, some of them my own.
Most significantly he led the procession of bishops at the beginning of the 1998 Jubilee 2000 Human Chain at the Birmingham G8 Summit. (Pictured above.)
As a Barnardo's boy from Walsall, this return to the city of his birth to promote an end to poverty and third world debt undoubtedly struck a personal chord. He loved the experience and afterwards talked about it frequently.
Pictures available here.
But Peter's heart was in London. Unconcerned with power or party politics, Peter adored everything about the capital, whoever governed it: his eyes would sparkle with child-like enthusiasm as he made his way through the streets or recounted stories of his day.
He loved the history of the city and being a part of that history. He loved being recognised, being photographed, representing London at home and abroad and being a part of what made London. 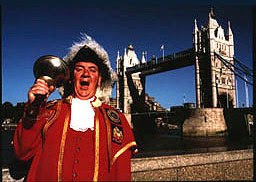 So it was a red letter day when Peter was made a Freeman of The City of London and I was delighted to be asked along to witness the occasion.
Unfortunately I wasn't available to see him enact his right to drive a flock of sheep over Tower Bridge a short time later. Typically, he used the opportunity to raise money for one of his favourite charities.
An unapologetic monarchist, I was once walking with Peter in the narrow streets of the West End when a black limousine slowed to negotiate street bollards. A window slid down and the Queen Mother, resplendent in veiled hat, leant forward. "Good afternoon, Mr Moore", she said, raising her hand and tipping her head.
"Good afternoon, M'am", said Peter, doffing his feathered cap to the smiling face at the window.
He positively glowed with pride at the recognition.
A good man but not always an easy man, Peter suffered poor health for many years but didn't let this stand in his way; some thought him a workaholic but he loved his work too much to be away from it, or from the city he adored, for long.
Peter was an ebullient, larger than life character. He loved people and people loved him. He was also an artist with a fragile ego; originally an actor who starred in Lionel Bart's Oliver!, he was perpetually worried about where his next job was coming from and whether he was loved; he was, of course, not only by Jamie, his son, but by so many. And will be very greatly missed by all of us who knew him.
To be remembered only with smiles: Peter Moore, 1939-2009.