Just occasionally one gets the sort of news that thrills the child within. Such was my reaction this week at the joyous tidings that Ghostbusters 3 is 'in development'.
Hooray for Hollywood!
There's no accounting for what thrills one, of course, and Ghostbusters might not be to everyone's taste, but for me it's an occasional necessity to slump in front of the screen and be entertained without having to engage brain.
Even better is the news that the original Ghostbusters (1989) cast of Bill Murray, Dan Aykroyd and Harold Ramis is to reunite on the new venture.
My cup of joy runneth over.

Is particle physics the new rock and roll? This question led a major feature in one of our more respected newspapers this weekend.
All because CERN, the European Laboratory for Particle Physics, the largest research establishment of its kind in the world, switches on its Large Hadron Collider (LHC) on Wednesday this week, in possibly the biggest science experiment ever staged. 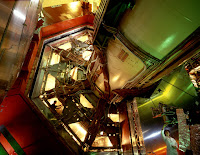 The LHC is a giant circular tunnel, 27 km in circumference, buried deep in the mountains beneath the Swiss / French border.
It is hoped this tunnel, a sort of latterday 'Big Bang' machine, will smash proton particles together at almost the speed of light to recreate conditions immediately following the big bang and by so doing answer the most profound questions about our universe and how it began.

Big facts about the Big Bang experiment:
1. The LHC will smash proton particles together 600 million times per second.
2. The results will be recorded by 4 cathedral-sized detectors built deep underground.
3. The experiment will generate 40,000 gigabytes of data every day.
4. The data will be analysed by a virtual supercomputer of 100,000 processors, situated around the world and linked by the internet.
5. The experiment has taken 20 years to prepare at a cost of more than $10 billion.
6. It has involved 10,000 scientists from 70 countries.
7. Scientists call the LHC the greatest scientific endeavour since the Apollo moon landings.

Whatever our personal beliefs about the origin of our universe, for its size alone this monumental research project deserves our full attention.
* * * * * * * * * * * 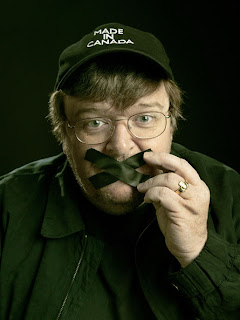 Back on the subject of movies, Michael Moore is about to release his new documentary free on the internet.
Moore, whose controversial movie, Farenheit 9/11, made some $70m at the US box office, said the decision recognised his 20th anniversary in the film business.
The documentary, called Slacker Uprising, follows Moore's trip across the States during the 2004 presidential race.
The documentary will be available for download in the US later this month for a limited period.
Michael Moore, never afraid to highlight the idiosyncrasies of life in America, won the Academy Award for best documentary for his 2002 movie, Bowling for Columbine.
He says the internet giveaway is, "being done entirely as a gift to my fans."
Decent chap.
Posted by M at 19:00
Labels: Big Bang, CERN, chat, Collider, European Laboratory, Ghostbusters, LHC, Michael Moore, particle physics, protons, speed of light, universe